15 km away form Matera, following a path that gives a first idea of varied landscapes of Lucania, rises the small town of Montescaglioso. If Matera means Sassi, Montescaglioso is Abbazia Benedettina. lnfact, its size is dominant in the ley-line that presents itself to who arrives from thee town of Sassi. To see closely this garrison of culture and civilization a thousand years old, you need to face with the hilly system that leads you at 365 metres above sea level. A climb easier than it seems, even if the rich vegetation that covers the slope sustains, especially on autumn and winter, the Swiss-effect made in the last ﬁve-six km at road of little hairpin bends. Unlike Matera, Montescaglioso does not let itself be watched from tap to bottom and, arrived at the hill of Monte Vetere, you have to do a last act of humility to see the ancient pan of the small town. During the path in the new part of the small town the visitor could close his eyes to open them up in Piazza Roma, the ancient square that bring us to the historical centre, form which the small town has developed immoderately in the last ﬁfty years. 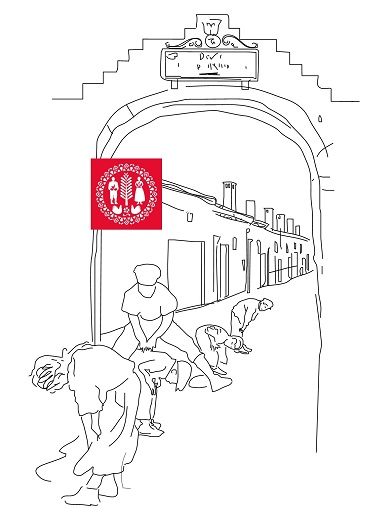 About ten metres away from the statue of St. Rocco’s church, the patron saint, you can arrive at the “Borgo“. Built in the second half of the nineteenth century, you can come in it through a portal with a rounded arch. But the term borgo was already considered an exotic inﬂuence in the local dialect.

Composed of trapezium, with the casedde placed near in the sides, at the beginnings the Borgo, realized by an enlightened man that was Nicola Andrisani, had little gardens and vegetables gardens in the central part and it aimed to provide houses to rent them to Americans’ families and settlement for micro industries like the mill, nowadays disappeared, and the olive-press recovered now as banqueting hall and restaurant. Its extraterritoriality has allowed to offer spaces to cults, like the one of the Pentecostali.

Starting from the fascinations offered from this physical and social place that is a part of the “little town-system”, but apart from this, was born the idea of recover the Borgo Andrisani to give rise to the diffused hotel.